Migratory animals are incredible in their ability navigate across vast distances, a feat which would be impossible without some type of navigational map and compass. It is likely that migratory birds detect rough bearings of latitude and longitude to help them to accurately reach their destination. Birds can easily detect their North/South location by looking at the position of the sun. However, identification of longitude proves to be less straightforward. This study aims to identify the method in which migratory Eurasion Reed Warblers solve this ‘longitude problem’. The research proposes that the birds can identify variations in the earth’s magnetic field which changes according to their geographical position.

The researchers captured a sample of Reed Warblers during their autumn migration in Rybachy, an area of Russia. They were then housed in a cage, surrounded by a coil, which allowed researchers to control the magnetic field within the cage. The magnetic field was manipulated to approximately match the magnetic parameters found 1000Km West, in Dundee, Scotland. Experienced migrators responded by reorienting from a South Westerly direction to a South Easterly direction, which would have put them back on course. This suggests that the birds can use changes in the Earth’s magnetic field to estimate their longitudinal position. The research was also carried out on inexperienced migrators in their first migrating season. When the magnetic field in the cage was changed, the inexperienced birds became disoriented, and could not reliably reorient themselves. They clearly detected that they were too far west of their expected location, but did not have enough experience of the migratory route to be able to successfully reorient themselves.

These results confirm the proposed idea that these birds can navigate by detecting natural variations in the Earth’s magnetic field. This is likely used alongside other navigational methods such as latitudinal cues and landmark features. This mental compass appears to be somewhat instinctive, but is developed through experience. This explains why inexperienced birds became disoriented by magnetic displacement, but could not correctly reorient themselves. This is phenomenon likely to be also true for other species that migrate long distances, and it would be interesting to conduct future research to confirm this. Summary by Beth Meopham. 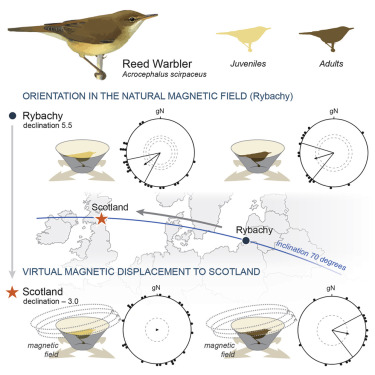